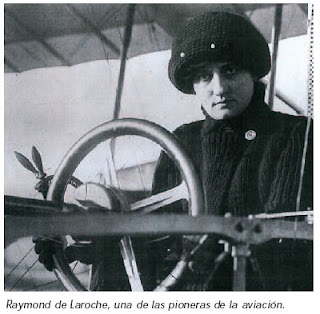 She was the daughter of a plumber. As a young woman, she became an actress, using the stage name "Raymonde de Laroche". (She has frequently been referred to as a Baroness, but this is an erroneous title bestowed upon her by Flight magazine.)

She had a son, André, whose father was reportedly the artist-turned aviator Léon Delagrange.

In October 1909, aviator Charles Voisin suggested she could learn to fly a fixed-wing aircraft, after having seen her piloting a hot air balloon.

On October 22, 1909, she flew 300 yards at Chalons, (located 90 miles east of Paris), where the Voisin brothers had their aviation school. Her flight is often cited as the first by a woman in a powered heavier-than-air craft. (This claim has been disputed. Some experts say Thérèse Peltier had flown in 1908.)

Author Eileen Lebow writes: "At the Voisin camp at Chalons, M. Chateau, a company engineer responsible for training new pilots, took Laroche in charge, supervised by Charles Voisin, who was already captivated by her charms . . . Her first attempts showed aptitude: She could drive the machine across the field in a straight line, have it turned by a mechanic, and bring it back to where she started. From that beginning, she progressed to making short hops. On her first try, she revved up the fifty-horsepower motor and taxied across the field, turned into the wind, and with full power raced back across the field. Suddenly her wheels left the ground, and she continued in the air for three hundred meters before gently settling down. There were loud cheers from the ground crew, and M. Chateau nodded approvingly to his pupil . . ."[ Before Amelia ]

In July 1910 she participated in the week-long airshow at Reims. On July 8, she crashed and suffered such severe injuries that her recovery was in doubt. Two years later she was fit again and had returned to flying. On September 26 , 1912 she was injured in the automobile accident in which Charles Voisin was killed.

On November 25, 1913 de Laroche won the Aero-Club of France's Femina Cup for a non-stop long-distance flight of over 4 hours duration.

During World War I, women were not allowed to fly, so she served as a military driver, chauffeuring officers from the rear zones to the front under fire.

Raymonde de Laroche intended to become the first professoinal woman test pilot. On July 18, 1919 she went to the airfield at Le Crotoy, to co-pilot an experimental aircraft, a Caudron. On its landing approach, the plane went into a dive and crashed killing both the pilot and de Laroche.