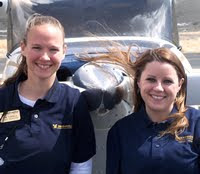 Two pilots from Embry-Riddle Aeronautical University’s Prescott Arizona campus will be participating in the historic Women’s Air Race Classic which starts on Tuesday, June 22, 2010. The race which has been in existence for over thirty years covers 2,483 miles and includes stops in nine cities.

The race originally started in 1929 under the Powder Puff Derby name. Even though the name changed, the tradition among female pilots to highlight their determination and tenacity to be respected aviators has kept the tradition alive. The race continues to stand as a symbol of pride for the friendly competitive spirit and camaraderie that still exist among all of the female aviators. This year the race celebrates the 100th Anniversary of Licensed Women Pilots.

Pilots Kim Turrell, from Simi Valley, California and Kristen McTee from Aurora, Colorado were selected to represent the Prescott team. Turrell is currently a Flight Instructor and McTee recently received the Outstanding Graduate Award during Spring 2010 graduation for achievements in her Aeronautical Science Professional Pilot program. Turrell and McTee were selected based on their piloting skills, interest in the event, competitive spirit, and their knowledge of aviation, safety, navigation, meteorology, and crew resource management. Kim Turrell participated in the race last year with Jenna Albrecht, where they werethe highest-scoring first-time team, took second place in the collegiate division, and came in sixth place.

The team will depart from Embry-Riddle’s Flight Line on Thursday, June 17, 2010 to start their journey. Their goal is to do well within the competitive field of more than 55 teams and over 100 pilots competing in the race and fly the fastest cross-country route. The team will be flying one of Embry-Riddle’s Cessna 172 single engine aircraft equipped with Garmin G1000 cockpit. Each aircraft is judged against its own handicapped cruising speed and the winning teams must follow the route as close as possible while improving the average speed. This format focuses on the piloting skills and decision-making instead of the speed of the aircraft.

A special Send-Off Celebration will take place on Thursday, June 10, 2010 at 5:00 p.m. at Good-To Go Cafe on the Embry-Riddle Flight Line. To RSVP for the event or to learn more about the racers and sponsorship opportunities, please contact Crystal Ellis at (928) 777-4305.

Embry-Riddle Aeronautical University, the world’s largest, fully accredited university specializing in aviation and aerospace, offers more than 30 undergraduate and graduate degree programs in its colleges of Arts and Sciences, Aviation, Business, and Engineering. Embry-Riddle educates students at residential campuses in Daytona Beach, Fla., and Prescott, Ariz., through the Worldwide Campus at more than 170 campus centers in the United States, Europe, Canada, and the Middle East, and through online learning. For more information, visit http://prescott.erau.edu.
Posted by Cathy Gale at 1:55 AM