JUST IN TIME FOR CHRISTMAS! 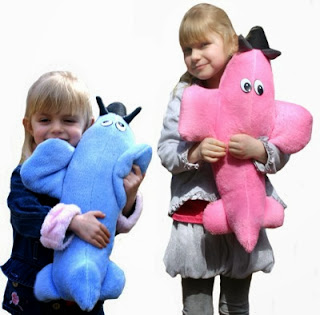 Waynoka, OK - While many adults love airplanes enough to cuddle with them, a new product from Powder Puff Pilot is designed for kids to do just that. The Oklahoma-based web retailer of aviation gear and accessories is introducing “My First Airplane,” a super soft, highly huggable plush airplane that comes in powder pink or sky blue.

“My First Airplane” is a natural addition to Powder Puff Pilot’s line of products that target women and children. “We’re all about ideas that popularize aviation among the younger set,” said owner and flight instructor Sue Hughes, “because when a child falls in love with aviation, it’s likely to last a lifetime.”

Hughes learned about “My First Airplane” from Michele McGuire, who designed the nearly 2-foot-long plush airplane. McGuire owns Safe and Sound Pets, which caters to canine air passengers with specially made headsets, logbooks, luggage, and other products for furry flyers.

“My First Airplane” grew from McGuire’s design for her popular airplane-shaped squeaky toys for dogs. She went to the same U.S. manufacturer with the new, larger design for kids, and it took off from there. Her tag line, “You're never too young to ‘have your own airplane’ and dream of flying.”

Powder Puff Pilot is one of dozens of retailers that carry products from Safe and Sound Pets.
Hughes’ own contribution to promoting aviation among children is a series of picture books she authored starring Claire Bear, a pink‑clad aerobatics pilot. She has sold thousands of copies of her four-book series published by Powder Puff Pilot, as well as children’s books from other authors. Powder Puff Pilot products are available at www.PowderPuffPilot.com.

Powder Puff Pilot was founded in 2008 by Sue Hughes of Waynoka, Oklahoma. Powder Puff Pilot products are sold online and at over 60 retailers, including aviation museums, pilot shops, and bookstores.

Posted by Cathy Gale at 2:18 PM No comments:

I'm on Nickelodian - just turned it on...

Saw something that just shocked me - and pleased me.

There was actually an "action-adventure" type commercial for girls.

Of course it must be based on The Hunger Games, I think, it showed a girl running around carrying a crossbow.

It will be interesting to see if there are any more toys of that sort.

I can well remember many years ago when Pirates of the Caribbean III came out, Elizabeth looked really cool in her CHinese pirate uniform - but when the notebooks for the series came out, there were plenty of Captain Jack and plenty of Will Turner, but none of her with a sword.
Posted by Cathy Gale at 9:04 AM No comments:

It will be a "Grand Cru Calendar" this year:  12 pictures of enthusiast and skilled women pilots taken at Oshkosh, also in France by Véronique Béringer, who is a pilot too.

Through their portraits you will discover their passion for flying and for their airplane.

The calendar will be available in November; you can order now.

Posted by Cathy Gale at 7:13 PM No comments: