If you’re ever in Vancouver BC and need a gift for someone...


I recently returned from a trip to Vancouver, BC and stayed with some friends. They were very kind and accommodating and took me everywhere I wanted to go. So on the day I left, I decided to give them a gift for being such good hosts. My friend Anne loves flowers, and so a flower arrangement from a florist in Vancouver seemed like the ideal solution. Well, to be frank they lived quite close to a Vancouver florist called Flowers on 1st, so it was a no-brainer.

Isn't this a cool logo?

I ended up not having time to visit the florist before they dropped me off at the airport. Fortunately this place had a website so I was able to scope out everything they had on offer. In addition to flower arrangements they had gift baskets with a variety of chocolates, so I have to admit I vacillated between flowers and chocolates. Finally I settled on the flowers. They make deliveries to anywhere in Vancouver so that’s pretty cool.

I could have made the order for the flowers directly form their website, but since they have a toll free number I just called them right up and spoke to them in person. The clerk I spoke to was friendly, the order was paced with no problem. And best of all...I was told a free order of chocolates would come with the flowers. I knew that Harry (that’s Anne’s husband) would love that.

Long story short, I was quite pleased with the service of this florist in Vancouver and can recommend them to everyone!

Posted by Cathy Gale at 1:29 PM No comments:

For close to 35 years, being a combat pilot in the Ghana Air Force has been a ‘no go’ area for ambitious young women who have the desire to ply their trade in that sector of the Ghana Armed Forces.

The first two female pilots who served during the Nkrumah regime left the Air Force after the 1966 coup.

However, the resilience and determination of a young woman, who had displayed great interest to train as a combat pilot 13 years ago, has changed all that.

Her dream would have nearly been aborted if she had not insisted that, “it was the Air Force that I chose because I wanted to be a pilot.”

Squadron Leader Selase Agbenyefia, who completed Sixth Form at the Mawuli School in Ho in 1996, applied to join the Ghana Air Force after she had watched a documentary on a female air traffic controller, which really impacted on her life.

“After watching the film, I asked myself why I couldn’t also pursue a career in the aviation industry. I discussed this great ambition with one of my brother’s friends who was a serviceman.”

According to Sqn Ldr Agbenyefia, his brother’s friend gave her the necessary encouragement and told her that she stood a better chance of becoming an Air Force pilot, especially with her subject combination, Physics, Geography and Maths.

With this motivation, Sqn Ldr Agbenyefia responded to an application by the Ghana Armed Forces for enlistment and stated her preference programme as the Ghana Air Force.

However, when the applicants were invited to the Burma Hall in Accra for the selection process, she realised that she had been pushed from the Air Force to the Army.

“I was not pleased with the change and approached one of the officers and told him I had applied specifically for the Air Force but my name had been changed to the Army. The officer told me, ‘You see that thick tall man over there, go and speak to him and if he agrees, the change would be effected.’”

That officer then was Maj General Joseph Narh Adinkrah, the former Army Commander and then Officer in charge of enlistment of officer cadets.

“Initially, I looked at the huge frame of the officer and got frightened because I hear at the time that the military did not tolerate anything that should not be tolerated. I, however, mustered courage and went to him and told him my problem. He looked at me then said ‘well, the Air Force is not for women, and could be the reason why your course option was changed.’ I insisted that it was the Air Force that I selected and that if I would not have the opportunity to train as a pilot then I would opt out. Maj Gen Adinkrah looked at me, checked my application and I believe he was overwhelmed by my confidence and asked that I should be included in the Air Force list.”

This was how Sqn Ldr Agbenyefia traversed to become the first female Helicopter pilot in the Ghana Air Force and the whole of the West African sub region in 48 years, who has flown all kinds of aircrafts— from L-29 fighter jets trainers to, Agusta -109 light attack helicopters, Bell 412, and MI-17 Helicopters.

She is also the first female military pilot to have participated in United Nations mission.

After that trailblazing feat, it took close to 10 years before four other ladies have joined the Air Force as pilots.

After the completion of the selection process, 20 of them were airlifted to Takoradi where they were introduced to flying for three months and grading to check whether one had the aptitude to fly.

After that exercise, the number was scaled down to 15 and they were transferred to the Ghana Military Academy (GMA) at Teshie in Accra where they went through rigorous military training for seven months.

After the training period at GMA, the group went back to Takoradi to prepare for further training in the United States where they went through Basic Flight Training for eight months.

The group later returned to Ghana with their licence as Qualified Professional Pilots. She later obtained a Bachelor of Science in Business Administration ( Finance Option) from the University of Ghana, Legon, in addition to a post graduate certificate in Public Administration from GIMPA.

According to Sqn Ldr Agbenyefia, she was very apprehensive the first time she was in the air, but she kept it to herself. She said her first personal experience in the cockpit was when she flew the L29 Basic Fighter Jet Trainer in September 1998 in Takoradi.

She said she was in the jet with her instructor, Air Commodore Philip Ayisa, now the Base Commander in Tamale.

“Air Commodore Ayisa was calm by my side and he kept reassuring me. He taught me the basic principles in flying. “In fact, when I took off and was in the air I just could not believe it was me, the young girl from Ho, in the air. It was unbelievable. After that experience, initial apprehension and excitement, flying became a normal routine for me.”

Sqn Ldr Agbenyefia said her mother was against her enlistment into the Ghana Air Force, but her daddy, a former educationist of blessed memory, always gave her the much needed support and encouragement.

According to her, the mother always kept praying that she would not make the grade and be dropped. However, eventually, when she made it, she was very proud of her military feat just the same way her siblings also felt.

She said her family’s joy was manifested at the Wings Parade held in Takoradi to confer the wing as pilot to them after they had returned from the US in 2001.

Since graduation, Sqn Ldr Agbenyefia has been flying regularly from the smaller machine to bigger machines after her turbine transition. She started first as a co-pilot then graduated to be the Captain of the aircraft.

She explained that the categorisation was based on skills and proficiency and the number of hours one had flown. So far, she had made an average of 1800 hours and considering her age and experience she qualifies to be a captain on all machines that she flies.

Sqn Ldr Agbenyefia has now specialised in helicopter and has flown within Ghana and to many remote locations where there were no airfields and no runways.

She had the best of flying experience in Cote d’ Ivoire, where she did a lot of medical evacuations, troop extraction and insertion, armed reconnaissance flights during the peak of the Ivorian crises.

Initially, she engaged in a lot of VIP flights, including flying ministers of state, Members of Parliament, chief executives, politicians with diverse backgrounds.

According to Sqn Ldr Agbenyefia, when some of these people who joined her flight got to know that she was the one in charge they were filled with apprehension and disbelief initially; they thought she was a flight attendant and “when they see me in the cockpit they feel uncomfortable but later they come back to me to confess after I had given them a smooth flight and now accept me and acknowledge my prowess.”

She is grateful to her male colleagues whom she described as very supportive and always ready to see her succeed in her career. Also, the Air Force top hierarchy have also supported her in a bid to bring about Gender parity in the Air Force.

However, she said there were still some male chauvinists, those who do not believe in women making it in a male dominated fields.

“It has been my determination to prove such people wrong and that is what I have set myself to do. I have succeeded in diffusing that tendency all these years.”

Turbulence in the air

Sqn Ldr Agbenyefia said she had encountered turbulence on several occasions and described it as a “bad experience.”

She maintained that once the pilot was in charge, there was no need to panic. “If the passengers panic why should the pilot also panic? At least you know your capabilities and that of the machine and how far to push it. It is just an uncomfortable situation and that is what we were trained to do — deal with tensed situations.” “I have also gone through emergency situations in the air where the aircraft develops mechanical faults, but the split second decisions you make will save you from catastrophe and as scary as it may be God has seen me through it all”.
Posted by Cathy Gale at 8:03 AM No comments:

I hope everyone who has an interest in learning to be a pilot is keeping track of what is going on with our politicians today. We need your help to make sure general aviation is affordable for a long time to come!
Posted by Cathy Gale at 7:45 AM No comments: 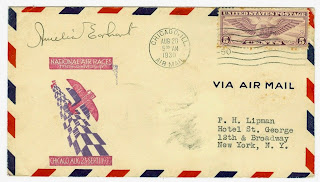 Click on the image to see it full size!
Posted by Cathy Gale at 7:49 AM No comments: