Tricia Walsh-Smith Needs to Get a Grip

According to a yahoo news report, Philip Smith, the husband of Tricia Walsh-Smith, was granted his divorce today, with conditions that had been agreed upon in a 1999 prenuptial agreement.

This despite -- or one hopes, because of -- the fact, that this woman recorded herself on a video, which she then posted to YouTube, trashing her husband in public, then calling his secretary to trash him again, revealing intimate details, etc. etc.

And her lawyers (whom I hope are costing her a bundle) had the gall to say, "This is a victim who is holding her head up," he said. "I think she comes off well."

On the contrary, she comes across as a complete and total idiot, and I hope her ex-husband sues her for defamation of character, and for sheer stupidity.

By the way, she got a $750,000 settlement, and claims that he has basically "thrown her out on the street."

Frankly, considering that YouTube video (Jesus, it's immature highschool children who pull that kind of crap, not grown women), I wouldn't halved her settlement and told her to get a job flogging videos to Youtube.
Man wins divorce from angry wife in YouTube video

-----------Having said all the above, I did a search on Tricia Walsh-Smith and found out she had a website, with a guestbook. And there were hundreds of entries there praising her for being a "groundbreaker."

Isaac Asimov put it best, a few decades ago. I paraphrase, "One half of the world will soon be responsible for entertaining the other half." With the proliferation of "reality shows" that's exactly what's happening. People are trying to make money off of their sad little lives...and the tragedy is that there are actually people willing to tune into this "entertainment."
Posted by Cathy Gale at 6:18 PM No comments: 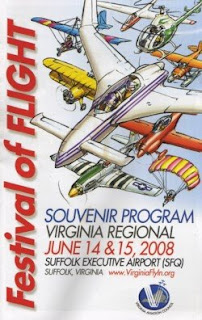 I attended the Virginia Festival of Flight at Suffolk Executive Airport (SFQ), on the final day, Sunday. (It was held June 14 and 15).

This was the first time it was held at Suffolk Executive Airport.

[MORE TO BE ADDED TO THIS SAME ENTRY LATER]
Posted by Cathy Gale at 8:00 AM No comments:

I believe I've mentioned this website before... a site designed to encourage girls to become pilots.

Their July ezine is out. It's only one page, but give it a look, and then go visit their website..

I like their motto, "Girls need flight plans, not fairy tales."
Posted by Cathy Gale at 7:20 AM No comments:

From Research to Relevance 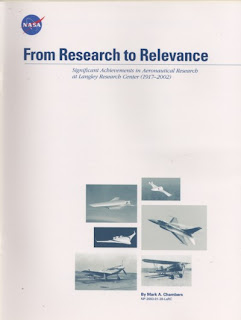 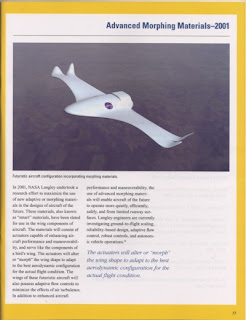 From Research to Relevance: Significant Achievements in Aeronautical Research at Langley Research Center (1917-2002).

Each subject has from a page to a page and a half of information. 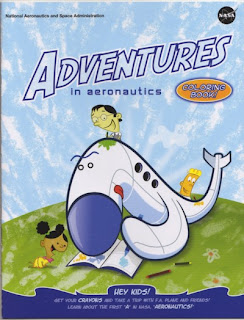 Okay...I'm 45, and perhaps the modern day animation "flavor of the month" has passed me by. I can't stand the animation in the current cartoons, for example - starting from Beavis and Butthead (ick ick on so many levels) and going on from there.

This coloring book has such stylized drawings that I really dislike, and I'm not sure what age level it's designed for. Presumably the parents will read it to the kids, while they color in it... It tells the history of the development of aircraft, in brief snapshots... 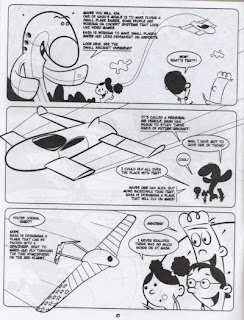 Posted by Cathy Gale at 1:40 PM No comments: 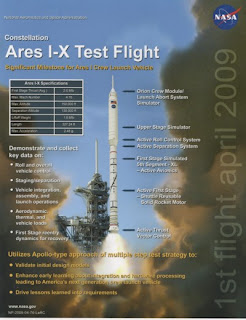 Just a one page sheet, nothing on the back... doesn't say what this is or what its to be used for.

According to Wikipedia:
Ares I is the crew launch vehicle being developed by NASA as a component of Project Constellation. NASA will use Ares I to launch Orion, the spacecraft being designed for NASA human spaceflight missions after the Space Shuttle is retired in 2010. Ares I was previously known as the Crew Launch Vehicle or CLV. The larger, unmanned Ares V is being designed as a complement to the Ares I; it will be the cargo launch vehicle for Project Constellation. Ares I and V are named after the Greek deity Ares, who is identified with the Roman god Mars.

(Interesting that it's called Ares/Mars, as Mars is generally considered the god of War. You'd've thought a more uplifting name could've been found....
Posted by Cathy Gale at 1:38 PM No comments: 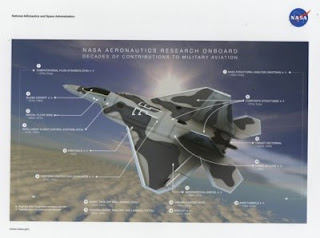 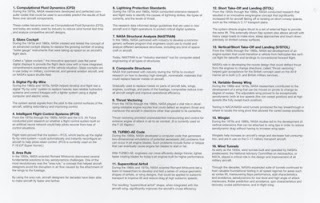 Another sheet demonstrating how NASA experimentation throughout the decades has led to materials and knowledge that have benefitted the entire aviation industry. 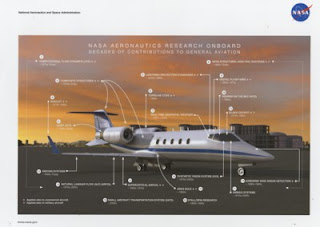 I attended the Langley Air Show for a few hours, a couple of weeks ago, and picked up lots of "paper."

NASA was out in full force, with a couple of experimental planes (I'll post pics later on), and lots of paper to take away.

As a niggle...their "paper" was of heavy, glossy paper stock. Looks very nice, hard wearing, but is it necessary to use such high quality for publications for an air show, the audience of which is mostly kids? Wouldn't cheaper paper have sufficed? (I say this only because I think that NASA needs to spend more on exploration and experimentation, and less on PR material.) Of course this material will be on display probably at every air show in the US, and maybe even at airshows in other countries, but still...

Anyway, in this entry is one of two photos entitled:

NASA AERONATICS RESEARCH ONBOARD: Decades of contributions to general aviation 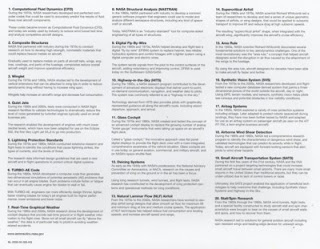 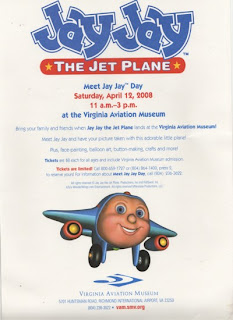 Ill-health continues to dog me, so I haven't been able to post here as often or as comprehensively as I'd like...

Will try to do better.

Today, I'm just going to share a flyer I picked up ...somewhere...a few months ago... I missed the actual event it advertises...

(The photo is sized for this entry..click on it and it will be bigger and more legible!)
Posted by Cathy Gale at 9:12 AM No comments:

Harriet Quimby (May 11, 1875 – July 1, 1912) was the first female to gain a pilot license in the United States. In 1911 she earned the first U.S. pilot's certificate issued to a woman by the Aero Club of America, and less than a year later became the first woman to fly across the English Channel. Although Quimby lived only to age 37, she had a major impact on women's roles in aviation.

Early career
A historical marker has been erected near the remains of the farmhouse in Arcadia, Michigan where Quimby was born. After her family moved to San Francisco, California in the early 1900s, she became a journalist. She moved to New York City in 1903 to work as a theatre critic for Leslie's Illustrated Weekly, which published over 250 of her articles over a nine-year period. She became interested in aviation in 1910, when she attended the Belmont Park International Aviation Tournament on Long Island, New York and met Matilde Moisant and her brother John, a well-known American aviator and operator of a flight school. On August 1, 1911, Quimby took her pilot's test and became the first U.S. woman to earn a pilot's certificate. Matilde Moisant soon followed and became the nation's second certified female pilot.

Hollywood
In 1911 Quimby authored five screenplays that were made into silent film shorts by Biograph Studios. All five of the romance films were directed by director D.W. Griffith with stars such as Florence La Badie, Wilfred Lucas, and Blanche Sweet.

Vin Fiz
The Vin Fiz Company, a division of Armour Meat Packing Plant of Chicago, recruited Harriet as the spokesperson for the new grape soda, Vin Fiz, after Calbraith Perry Rodgers' death in April 1912. Her distinctive purple aviatrix uniform and image graced many of the advertising pieces of the day.

English Channel
On April 16, 1912, Quimby took off from Dover, England, en route to Calais, France and made the flight in 59 minutes, landing about 25 miles (40 km) from Calais on a beach in Hardelot-Plage, Pas-de-Calais. She had become the first woman to fly the English Channel. Her accomplishment received little media attention, due to the sinking of the RMS Titanic on April 15.

Death
Quimby's career ended on July 1, 1912. She was flying in the Third Annual Boston Aviation Meet at Squantum, Massachusetts. William Willard, the event's organizer, was a passenger in her brand-new two-seat Bleriot monoplane. The plane unexpectedly pitched forward for reasons that are still unknown. Both Willard and Quimby were ejected and fell to their deaths [as they did not wear seatbels], while the plane "glided down and lodged itself in the mud." Harriet Quimby was buried in the Woodlawn Cemetery in The Bronx, New York. The following year her remains were moved to the Kensico Cemetery in Valhalla, New York.

Legacy
The Old Rhinebeck Aerodrome's restored and flyable Anzani-powered Blériot XI, which bears the Blériot factory's serial number 56, and the still-current N-number N60094, could possibly be the aircraft that Quimby was flying in 1912 during the Boston Aviation Meet.[citation needed] The previously wrecked aircraft that is now flying at Old Rhinebeck was found stored in a barn in Laconia, New Hampshire in the 1960s and fully restored to flying condition, most likely by Cole Palen, ORA's founder.

A 1991 postage stamp featured Quimby. She is memorialized in two official Michigan historical markers, one in Coldwater, and one at her birthplace in Manistee County, Michigan.
Posted by Cathy Gale at 8:59 AM No comments: