Women in Aviation to Honour Captain Koki at Akwaaba


In partnership with the organizers of Akwaaba African Travel Market, Women in Aviation (Nigeria) International-Glowing Wings Chapter said it would honor Capt. Irene Koki.
Capt. Irene Koki is the first Woman in the World to captain the World’s newest Plane -the Boeing B787 Dream liner and would yet again receives recognition for her pioneering role in Africa’s Aviation Industry.  She was recognized at Akwaaba in 2009 as the first African Lady Captain of a Commercial Airliner.

Women in Aviation, International with headquarters’ in the USA, is a non-profit organisation that is dedicated to the advancement of women in all Aviation career field and interests with over 10,000 Professionals all over the world.

The President of the Glowing Wings Chapter- Mrs Ify Megwa who would be leading her Chapter to the fair said: "We deemed it fit to honour one of our own, Capt. Irene has accomplished a feat no female has ever attained in Africa. In doing this, we are not only recognising her for been exceptional, we hope this will encourage more females to reach extraordinary heights in their Aviation careers and also encourage young women to consider aviation as a career too.

"So, we couldn’t think of a better medium to present this award to her other than Akwaaba, a credible platform that has consistently honored pioneers in Africa over the years."

Rwandan First Female Pilot with Rwandair Esther Mwange will also be honored at the event.

CNN) -- In 1937, Amelia Mary Earhart disappeared over the Pacific Ocean attempting to circumnavigate the globe.

Later this month, Amelia Rose Earhart will try to do what her namesake could not.
Despite recently discovering she's not related to the more famous Amelia Earhart (for years she'd believed she was), the 31-year-old pilot will attempt to become the youngest woman to navigate around the world in a single-engine aircraft.
CNN spoke with Earhart about her forthcoming record attempt.
CNN: Did your name spark your interest in aviation? 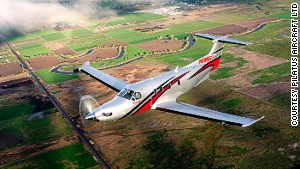 Earhart will make her record attempt in a Pilatus PC12.
Amelia Rose Earhart: Getting asked questions day in and day out about my name has always been a part of my life.
People would say to me, "Are you a pilot? Do you think you can ever fly around the world?"
And for a long time, I said, "No, I'm not a pilot but I always thought about flying around the world."
It was always in the back of my mind just as an ultimate goal.
So I took my very first discovery flight, which is basically the first flight that every pilot goes through.
After that first discovery flight, I was totally hooked.
CNN: What was your reaction when you discovered that you weren't related to Amelia Earhart?
Earhart: It was a blow because, for 30 years, I thought that I was related to Amelia in some distant way.
But it really wasn't why I started flying, I wanted to fly because it's a lot of fun.
So at this point, I'm almost glad that the distant relationship isn't there because it shows that you don't have to be named after somebody famous to do something great.
CNN: Why recreate her flight?
Earhart: As pilots, whenever we fly, we have a flight plan. We open that flight plan, and then when we return safely, we close that flight plan.
Unfortunately, when Amelia disappeared in 1937, she never got a chance to close her flight plan and that's what we all, as pilots, hope to do. 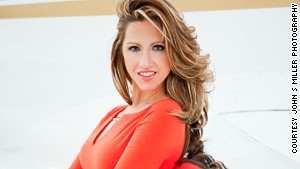 If successful, Earhart (31) will become the youngest woman to circumnavigate the world in a single-engine aircraft.
I started thinking, "What if I could symbolically close Amelia's flight plan for her?"
CNN: When is the takeoff date and where will you start and end the flight?
Earhart: We start and stop the flight in Oakland, California.
When you look at the departure date, we've got a three-day window from June 23 to 26.
The reason for that is we're doing installations on the plane: additional fuel tanks and also a satellite communications system that will allow us to livestream from the cockpit.
CNN: How long will the entire trip take and how much will it cost?
Earhart: The whole trip will take two and a half weeks.
We've got 17 stops in 14 countries.
Over the past year and a half, I would say close to $2 million is probably the total value of the trip.
CNN: Are you nervous about embarking on such a major endeavor?
Earhart: My biggest fear is that the trip will just fly by and the two and a half weeks will be over before I know it.
I've spent years planning this and it is my passion project. I don't have a lot fear around what if something goes wrong with the aircraft.
That's not a concern of mine at all.
I do have realistic expectations if something happens weather-wise.
Flying around the inter-tropical convergent zone is particularly tough for pilots so I'm paying close attention to the weather patterns there.
CNN: Does the legend of your namesake worry you at all?
Earhart: Not at all. Amelia's disappearance unfortunately came at a time when the technology just wasn't there to track her. 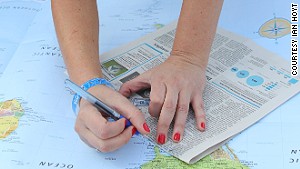 Two years of planning and $2 million of expenses will bear out this month.
But when you think about how far that's come in the last 77 years, we're looking at whole different world.
I'm flying the Pilatus PC12 which is a single-engine turboprop and it's one of most technologically advanced planes out there.
We've got dual GPS systems on the aircraft.
We've got navigation that shows us exactly where we are and exactly what point in space.
We want to show people that ... even small planes can be very manageable over long trips like this.
CNN: How do you pack for this kind of trip?
Earhart: That is the ultimate question because you have to be very cognizant of the weight aboard the aircraft.
Packing-wise, I have to keep everything very limited.
So we'll pack a certain amount of nutritional products.
Beauty products, I have to keep to a bare minimum, unfortunately.
CNN: What do you do when you're not flying?
Earhart: I'm really close with my girlfriends here in Denver. We will go running together, do stuff outside together.
Trips or getting out of town, that's pretty much to a minimum.
I did just have a chance to go to Geneva, Switzerland, for an aviation conference.
That was a chance to relax even though we were working the whole time.
Things like that, where you're working and playing, I like to blur those lines as much possible.
When I'm always playing and always working, that's when I'm happiest.
Posted by Cathy Gale at 8:06 AM No comments: