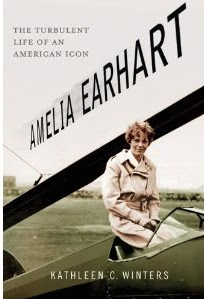 Description
When Amelia Earhart vanished over the Pacific Ocean in 1937 during an attempted around-the-world flight, she was at the height of her fame: Adored by the public, she counted celebrities and politicians among her many friends and was idolized by women across the globe. She remains a fondly remembered object of fascination today, as her mysterious disappearance continues to inspire fevered speculation and regular attempts to locate her crash site.

This nuanced and often surprising biography by acclaimed aviation historian Kathleen C. winters moves beyong the caricature of the spunky, preternaturally gifted pilot to give us a more complex portrait of Earhart.

Drawing on a wealth of interviews, flight records, and other extensive new evidence, this book traces Amelia's unconventional childhood as the daughter of a spendthrift railroad lawyer and recounts her growing passion for aviation, her rocky first flights, and the remarkable series of events that transformed her into a household name almost overnight.

It shows us a spirited adventuress and flawed heroine who was frequently reckless and lacked basic navigation skills, but who was also a canny manipulator of mass media. Even as other spectacular pilots went unnoticed by the public, Earhart and her husband - the publisher and impresario George Putnam-worked to establish her as an international celebrity, devising ever-more daring stants that culminated in her infamous last flight. Sympathetic yet unsentimental, and filled with gripping accounts of Earhart's exploits, this biography helps us to see a global icon with fresh eyes.
Posted by Cathy Gale at 1:04 AM

I am reading this book at the moment, I am finding it rather unputdownable to tell the truth, as Kathleen is such a good writer. It is the first book of hers that I have read & only now, as I look in the back cover do I see that she died last August, before this book even came out. That's not fair!