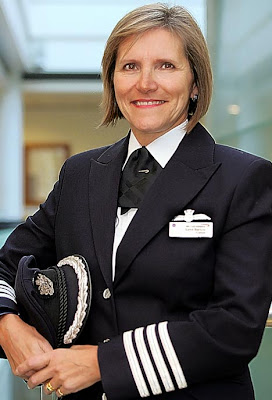 This is Captain Lynn Barton, who will make aviation history by piloting the first flight into Heathrow Terminal 5 when it opens for business on Thursday.
Her Boeing 747 - flight number BA026 - carrying 350 passengers, will arrive at the £4.3billion terminal from Hong Kong at 4.50am.

Captain Barton, 51, who became British Airways' first female pilot in 1987, is 'absolutely thrilled' at being chosen for the job.

She applied to operate the inaugural T5 flight last month while she was on holiday in Barbados.

'It was my husband's idea to bid for the flight but the timing meant I had to tear myself off the beach to find a computer so that I could apply for the airline's flight-bidding system,' she said. 'I never thought I'd be in with a chance of actually getting the flight.'

She had to wait, however, until she returned to Britain to find she had won it.
'I was absolutely thrilled,' said Captain Barton. 'T5 has been the focus of the airline's future for several years now and to operate the first flight is a huge honour. I can't wait.'
Aviation also dominates the family home in Alton, Hants. Captain Barton's husband Mike, who has a private pilot's licence, is building a two-seater aircraft in the garage.
She said: 'I don't have a private licence any more so poor Mike has a very knowledgeable but nagging copilot-when we fly together.'

Eight years before joining BA's Boeing fleet Captain Barton was the first woman to be sponsored by the airline for her commercial pilot's training.

The airline now has 175 women among its 3,200 pilots - significantly higher than the national average.

She says she never considered any other career: 'I had my first flying lesson at the age of 16. I was incredibly proud to have been BA's first ever woman pilot and now I have another first to my name.'

Now Captain Barton is planning her passenger announcements for the historic flight.
She said: 'I want to make sure that I mark the occasion so that every one of my passengers can be part of history too.'
Posted by Cathy Gale at 12:30 PM